Two Lullabies in One 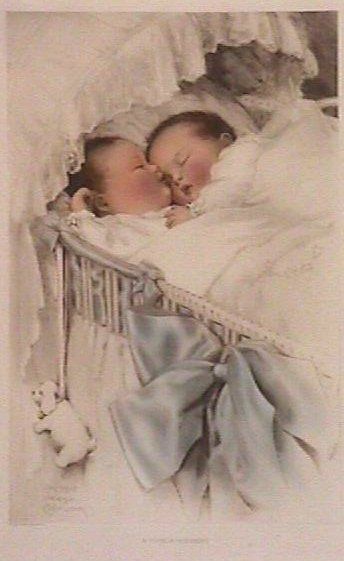 Well hello all!  Another week, another step closer to Christmas…. I cannot get my head around how quickly the time is going.  It seems that with every year the time period between September and December feels shorter and shorter, which obviously means that getting organised for Christmas just gets more and more frantic with every year that passes.  Bonus.

A Lullaby for Twins

I ventured into London last week to visit a good friend of mine who has just brought twins into the world.  Two beautiful babies, a boy and a girl, and I was delighted when I was asked to write a lullaby for them both.  It was decided that one lullaby for the both of them was best, seeing as they still sleep near each other and share a room together.  So off I trotted to the keyboard, twins’ names in hand, and wrote a lullaby that sang to both of them by name.

My friend had mentioned that the twins had been unsettled through the night and weren’t sleeping too well, so I wanted to write something really soothing, calming and dream-like.  Other than that, there were no specific details for this one, so I had free rein on a creative level!

The melody was written within about 15 minutes!!  YES!  One of those days where I sat at the keyboard and just played a chord or two and tinkered with a few notes and the melody was born almost instantly!  The melody itself was very enchanting but also slightly haunting with its mix of major and minor chords, and the mid section took, as I believe, a really unexpected but beautifully progressive direction.  Obviously, with two little twins who are not sleeping so well, the lyrics centred around being calm, staying quiet, and listening solely to their lullaby; letting each note in through their ears and further into their whole being until each musical note becomes one with their steady and slow breathing.  And of COURSE a highly important mention of mummy and daddy’s unending love for each of them!

This was a lullaby that I thoroughly enjoyed writing, recording and finally handing over to two special little bundles.

And as if the appreciation and gratitude of my dear friend were not enough, I was contacted by her a few days later.  The little boy had been very unsettled and was crying with no real sign of calming even after milk, nappy and other possible causes were addressed one by one.

Now, while I was visiting my friend I was introduced to a new contraption that I honestly don’t think was in existence when I had my first baby (could be wrong, may have just not been ‘hip’ enough at the time!!).  It is called The Mamaroo!!  This little gem looks like half an egg perched on top of a stand, and when baby is laid in the half an egg (a very comfy half an egg mind you, all cushioned and padded like a little man-made hug) and the buttons are pressed on the base, the egg begins to move as if floating on a cloud, slowly making sleep inducing figures of eight with not one sign of a jolt or a hiccup.  It moves so smoothly that you find yourself swaying involuntarily while you watch it…

This spacey looking sleep inducer has a built in speaker, so that you can plug in music should you feel the need, so my friend decided that a stint in the Mamaroo would be a good solution to the endless crying, and while she was at it, she plugged in her iPhone and started playing the twins’ lullaby through the speaker.  Apparently, no sooner had the piano started her baby boy stopped crying!!  She said that he listened intently to the lullaby as it looped for about 20 minutes, just yawning and relaxing while he listened to his lullaby.  This was news that brought a huge smile to my face and filled me with such a wonderful feeling of happiness!!  The power of the lullaby strikes again!

As an aside, I am told reliably that this has occurred more than once, suggesting that her little boy is very fond of his special, personalised song.

Personalised Lullaby for TWINS?… I Think So!

So that is now the next thing on the agenda, a personalised lullaby to add to the Lullaby Lu Collection, that can be bought for twins.  I cannot wait to get started, and to add it to the already growing repertoire.

So on that note, I shall love and leave you.  Keep in mind the power of the lullaby, of music and its ability to influence us in such positive and multi-faceted ways.   Come and look at our packages because we know that we have a gift here that is as special and personal as you can get.  Until next time… 🙂